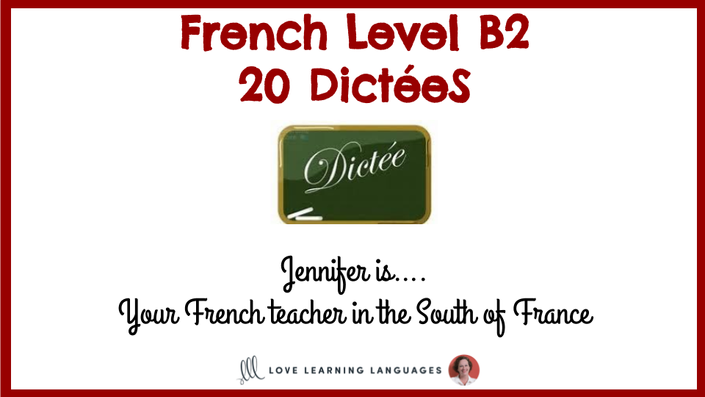 20 dictation exercises: Each includes B2 level dialogues with English translations

The coupon code you entered is expired or invalid, but the course is still available!

This is a set of advanced level dictées with 20 dialogues included. These dictations are short dialogues between two people, read by François, a native Parisian. The dialogues are read slowly first and then even more slowly to give students time to write them down. Punctuation and links (liaisons) between words are pronounced. English translations are included.

Take out a pen and paper, and be ready to write what François dictates. The dialogues are read at full speed with proper spoken French intonation at the end of each dictation exercise. Pay close attention to spelling, gender, plurals and agreement when writing.

Once you finish writing and checking your work, it's a good idea to practice repeating the sentences while reading the text for correct pronunciation. You could even record yourself and compare your pronunciation to François'.

STEP 1 ➯ Prepare yourself with a pen and paper or use the student response sheet located below the answer keys in the PDF.

STEP 2 ➯ Audio presentation of the dictée. Listen as François reads each dialogue once at a medium speed and then dictates each part of the dialogue slowly enough to understand and write at the same time.

STEP 4 ➯ Listen to the dictées again and practice pronouncing the text as you read along.

This lesson is included in my money saving FRENCH PROGRAM FOR SELF-LEARNERS and in my B2 Level Program.

"Dictation is the transcription of spoken text: one person who is "dictating" speaks and another who is "taking dictation" writes down the words as they are spoken. Among speakers of several languages, dictation is used as a test of language skill, similar to spelling bees in the English-speaking world."

Join the LLL French Academy on Facebook and get to know others in the community!

Questions? Write to me: [email protected]

Jennifer is originally from Louisiana, and has been teaching French for over 20 years. She has been living in France with her husband and children since 2013, and continues to teach French both online and locally. She completed a BA in French and English, and taught French and moved to France for a year before completing an MA degree in French literature and language. While living in the US, she taught French for 15 years at Saint Louis University High School, a Jesuit college preparatory school for young men.

French dictées - Level B2
Available in days
days after you enroll

When does the course start and finish?
The course starts now and never ends! It is a completely self-paced online course - you decide when you start and when you finish.
How long do I have access to the course?
How does lifetime access sound? After enrolling, you have unlimited access to this course for as long as you like - across any and all devices you own.
What if I am unhappy with the course?
We would never want you to be unhappy! If you are unsatisfied with your purchase, contact us in the first 30 days and we will give you a full refund.
off original price!

The coupon code you entered is expired or invalid, but the course is still available!